Unicode is an international standard of encoding characters in different world’s writing systems. It encodes every written character, symbol, punctuation mark, or emoji in the world writing system. The Unicode version 13.0 is the latest version of the Unicode Standard. It adds a total of 143,859 characters. In this version, 5930 characters are newly added. These newly added characters include new modern and historic scripts and emoji symbols.

The new scripts and characters in this latest version of Unicode standard include very unique and rare languages of the global writing system. It also includes different numerical symbols. The new characters and scripts of version 13.0 are as follows:

Below are some popular symbol additions in this version:

Version 13.0 also has enhanced and improved support for CJK unified ideographs. This version of the Unicode standard also includes 214 new graphic characters. They are attained from the microcomputers of the mid-’70s and late ’80s. These new graphic characters were introduced as a part of the Teletext broadcast. The inclusion of these characters in this version will provide compatibility for some retro hardware.

The emoji characters in this version include some food, objects, animals, insects, or people. Version 13.0 also adds two new important emojis or symbols. This important addition is the transgender flag and transgender symbol. This version is also synchronized with the sixth edition of ISO/IEC.

Advantages and Disadvantages of Unicode 13.0

Following are some advantages and disadvantages of Unicode version 13.0:

Some significant changes were made in Unihan Database. It included regulations and enhancements of its properties. Additional support for less-used language includes a character used in Sinhala to write Sanskrit. An advantage of its popularity is the addition of new emoji characters. Because emoji symbols are very essential in mobile phone usage. But this amount of new emoji addition is less alternating to its previous version, which is a disadvantage to it. This version is added with several new historic and modern scripts. The addition of new symbols is also an advantage to this version. The new symbols include the important Trans pride flag symbol and two Vietnamese reading marks. 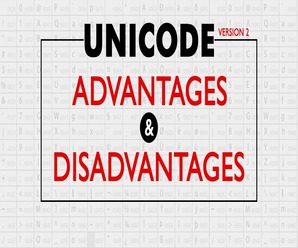 UNICODE VERSION 2.0 The Unicode standard is a fixed scheme …

When it comes to encoding textual characters into digital form, …