The Unicode standard is an encoding platform, published by the Unicode consortium. It t translates every written number, symbol, character, or emoji into different world writing systems. It encodes every written character, no matter what the language is and no matter what the device or application is. It is adopted by almost every software provider. It provides the compatibility of transferring the data without corruption. This topic is about version 7.0 of the Unicode Standard. Version 7.0 is the major version and was an important release of the Unicode Standard.

The Unicode version 7.0 was released in June 2014. This version of the Unicode standard adds a total of 2834 characters out of which 23 were new scripts, many symbols, and new characters. Significant additions in the character set include the new currency symbols: the ruble which is used in Russia and many other countries, and the manat which is used in Azerbaijan. Many symbols including geometric symbols, emoji symbols, ornaments, arrows, web dings, and wingdings set. And 23 new scripts for languages of China, India, or many other Asian countries, North America, and Africa. And the inclusion of letters used in Teuthonista. It also includes a new notational set of Duployn.

Some of the important updates in the Unicode version 7.0 are as follows:

Advantages and Disadvantages of Unicode version 7.0

UNICODE VERSION 11.0 Unicode is an international standard for character … 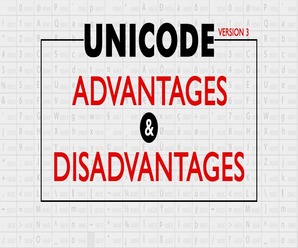 UNICODE 3.0 The Unicode standard version 3.0 is a major …