The Unicode version 3.0 has a total of 49,194 characters from the world’s script. It has added 1,307 characters over the previous version. Besides adding new characters, it also adds several new blocks. The encoding of the Unicode transformation formats is provided including the UTF-8 and UTF-16, with UTF-16BE, and UTF-16LE. The relation between codes has been clarified in this version of the Unicode Standard. The case properties have also been extended to increase the mapping for multiple characters. Bidirectional behavior algorithm rules have also been clarified and new properties were assigned to it.

The Unicode version 3.1 is a minor version of the Unicode standard and it supersedes the previous version. This version also includes more improvements and more code features. This version was released in March 2001 and consists of 44,946 new encoded characters. All of these characters cover a large number of unified CJK ideographs, multiple historic scripts, and several sets of symbols. It is the first version that encodes the characters beyond the 16-bit encoding scheme or the Basic Multilingual Plane. These new characters encode on U + 10000 or higher, synchronized with ISO/IEC-second edition.

Advantages and disadvantages of Unicode 3.0

Following are some of the advantages and disadvantages of these Unicode versions:

The Unicode version 3.0 was improved and rewritten to improve its structure. This is reorganized as well as enhanced for better performance. It also features significant clarifications with new modifications. It covers multiple writing systems such as Cherokee, Mongolian, Burmese, Ogham, Syriac, Sinhala, and many more. Version 3.1 features no significant improvement over the previous version. One disadvantage to this version is that it does not encode on UTF 16-bit encoding scheme or Basic Multilingual plane (BMP). But the Unicode standard version 3.1 contains some features that supersede over them. Version 3.2 features a large number of coded features.

UNICODE 6.0 The Unicode version 6.0 is the first version … 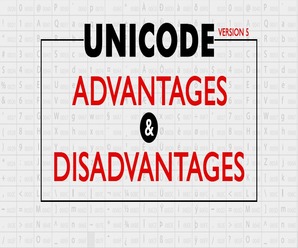 The Unicode version 5.0 is also an important version of …