The Unicode is invented in concurrence with the International Organization of standardizations. Unicode shares the ISO/IEC 10646 character set, which is the universal character set. It works comparatively as encoding standards but contains more information for implementers. It is a standard for information technology that is used for representing, managing or encoding the text written in the word’s writing systems. It consists of 143,859 characters for encoding. It has localization in most of the recent technologies such as Java and XML. It can be implemented by using different character encodings. Unicode has three types: UTF-8, URF-16, and UTF-32. Unicode is the most presiding encoding standard. It can store all types of texts in all different writing systems. The latest version of Unicode is version 13.0 released in March 2020. Below is a detailed explanation for Unicode 13.0.

Which is Unicode’s latest version?

Unicode 13.0 is the latest version of the Unicode Standard. It was released in March 2020. It adds 5930 characters and 143,859 characters in total. This version of the Unicode standard features a significant update. It includes four new scripts with a total of 154 scripts. Version 13.0 supports modern language with symbols addition and scholarly work. This version adds support for unique written requirements and lesser-used languages in the world. The new scripts and characters for version 13.0 include:

The popular symbol additions used in version 13.0 are:

The Unicode version 13.0 consists of core specifications, code charts which maybe delta and archival. It also includes Unicode Annexes and Unicode Character Database. The core specification of this version gives general information and a guide to the implementers. And the code chart features the glyphs for all of the Unicode characters. The Annexes gives detailed information about certain aspects of the standard. The UCD (Unicode character Database) features detailed information for implementers, making it easy for them to implement Unicode standards. Talking about the stability policy, there is no significant change in version 13.0 as compared with version 12.0.

Version 13.0 of the Unicode standard is the result of the endowment and persistence of many people over several years. Many archaic and historic scripts are encoded in this version. Moreover, it also includes multiple important symbols. 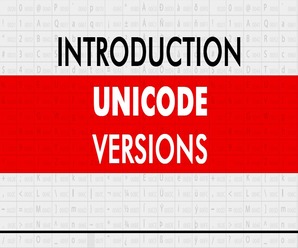 What is Unicode? Unicode is an encoding standard for the …

There are glyphs in fonts, and that can vary from …