Home
Blog
Why Is Unicode Gaining Popularity and Adaptability?

There are hundreds of encoding systems available for all the languages to incorporate them into the virtual spectrum. Therefore, the interpretation of the different languages in regard to the text’s input, output, display, and sorting is dependent on different encoding schemes. The programs are usually designed so that they can run or handle a single program at a time, or they can switch with another one for processing. Otherwise, the conversion of encoding schemes, be it internal or external, isn’t possible. Therefore, the major problem with the encoding schemes is that there is no single and authoritative source that can be adapted to make it a standard encoding system. There are a lot of issues when there is a need to transfer information from one device to another. If a program is developed in a way that it processes the conversion and carries the data at the same time, then there is a need for hundreds of megabytes to be utilized.

The Unicode encoding scheme covers all the languages with a single set of characters. The machine-friendly scheme also fits into any given program and is compatible with existing applications and protocols that are adopted worldwide. The scheme is a superset of ASCII. It is the most widely used character set in the entire world, which makes Unicode machine friendly. The web developers are also using the Unicode format for showing textual results on websites. It is fully compatible with HTML and XML. The format is also being used in e-mails as well. The encoding scheme comes with the property of covering all the characters from around the globe. There are few exceptions, but they are also being covered with the passage of time. The characters can be manipulated in the Unicode standard scheme with the help of unique numbers, which are known as Unicode points.

The Unicode standard encoding scheme is used for processing, interchange, conversion of textual content from different languages from around the globe. However, many people often ask why it is the most important one. It is due to the fact that computers can only comprehend numbers. For that reason, there comes a need for characters that can be converted into numbers so that the computers may store numbers and text that humans can understand. In this scenario, the character encoding is required for devices to display information to the users. However, there are issues with the custom character encoding scheme because it can work on your local device efficiently but then transfer to another device; the machine wouldn’t be able to understand the text or numbers in any way.

The Unicode system is a new creation for making the binary code in accordance with the script and text. Therefore, the scheme is known as Unicode Worldwide Character Standard. There is a unique number assigned to every character in Unicode. The scheme has developed as a dominant system for storing and processing texts from all languages. In addition, the information processing systems are now built on the basis of Unicode.

Hurdles Before the Inception of Unicode

Before the Unicode encoding scheme, different systems were used for character encoding series, and numbers were assigned for each one of them. However, those characters weren’t able to engulf all the scripts from the languages presented worldwide. In this regard, ASCII became the first scheme that was spread all around the world. But it was also limited to only 256 characters, which makes it difficult for it to encode all the languages. Therefore, there was a need for an encoding system that was universal to eradicate the hurdles. Thus, the inception of Unicode was a revolution in information processing systems.

In the last analysis, the Unicode system has enabled the incorporation of all existing languages. The encoding system has no limitations, but few ends aren’t still explored; however, computer geeks are continuously adding new characters into the encoding scheme to make the system compatible with all the languages. Thus, the system is of great assistance for processing, converting, transforming, and reading the text and numbers of languages.

Zalgo Glitch Text Have you ever tried to create scary … 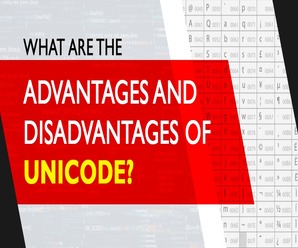 Advantages of Unicode Unicode has multiple advantages that are quite …